With spending on augmented reality (AR) and virtual reality (VR) technologies predicted to surpass $50bn by 2022, with the manufacturing industry firmly...

With spending on augmented reality (AR) and virtual reality (VR) technologies predicted to surpass $50bn by 2022, with the manufacturing industry firmly at the forefront, Tesla has recently filed a new patent to explore the use of AR to bolster its productivity and operational efficiency across its factory lines, in alignment with the emergence of Industry 4.0.

The patent, filed with the World Intellectual Property Organization (WIPO), has been defined as an "augmented reality application for manufacturing."

Noting that the automotive industry is facing a number of challenges across the production line, the company outlines that such technology will support “the positioning and programming of robots for constructing and assembling automotive parts, the placement of mechanical joints, the quality inspection of assembled plants, etc.” Introducing such technology will improve the accuracy and build of new vehicles, reduce the time and cost, as well as accelerate further development and support the growing relationship between employee and robotics.

The use of AR will therefore work to utilise vast quantities of data and images, providing vital information in real-time across the factory floor. The patent highlights that such tools will complement “the use of AR device such as a smartphone that includes a camera and sensors or a pair of AR smart glasses.” Tesla is known for trialling Google Glass’ headset, but is unclear whether these are still in use at the company.

Throughout the patent, the company notes that “the AR device overlays data corresponding to features of the object of interest … examples include spot welds, self-pierced rivets, laser welds, structural adhesive, and sealers, amongst others.” Replacing traditional manual processes, such new tools will reduce time to market, use of redundant materials and lower costs across its operations.

A diagram within the patent was also provided, which has been illustrated below. 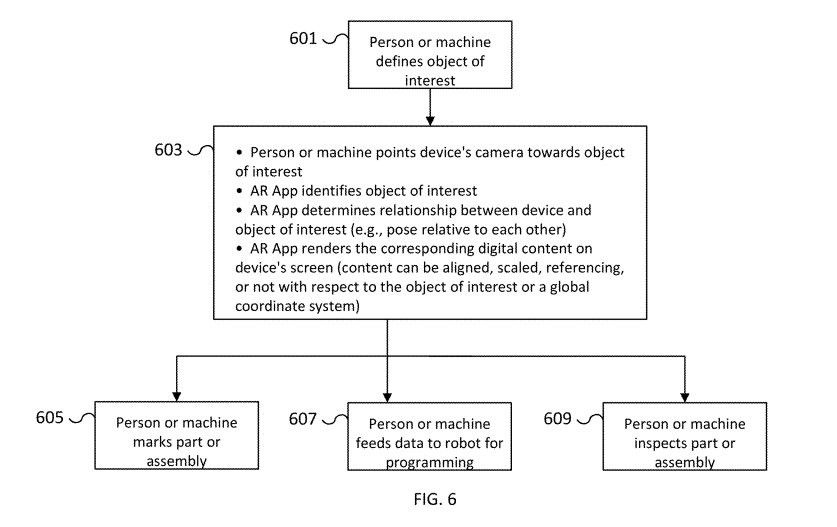