Toyota and Suzuki agree to look at future collaborations

Toyota and Suzuki have announced their agreement to begin considering concrete collaboration in new fields. The duo have been considering the concrete d...

Toyota and Suzuki have announced their agreement to begin considering concrete collaboration in new fields. The duo have been considering the concrete details of new collaborations since completing a memorandum of understanding toward business partnership in 2017.

Toyota and Suzuki, in addition to bringing together Toyota’s strength in electrification technologies and Suzuki’s strength in technologies for compact vehicles, intend to grow in new fields, such as the widespread popularisation of electrified vehicles. Details of intended areas of collaboration are outlined below. 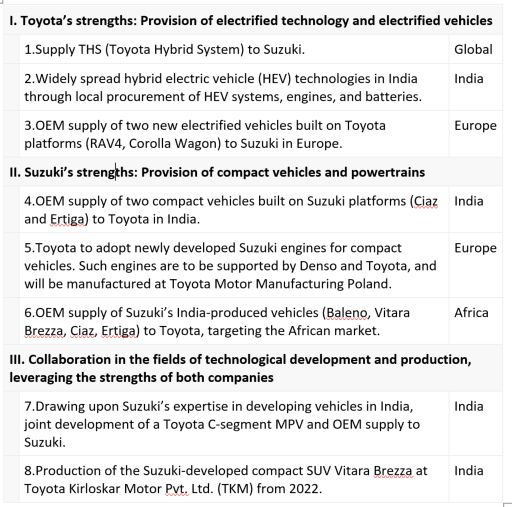 Toyota and Suzuki continue to fairly and freely compete against each other, both companies intend to consider further collaboration to realise a sustainable future.

“When it comes to vehicle electrification, which is expected to make further inroads, hybrid technologies are seen as playing a huge role in many markets, as from before. Widespread acceptance is necessary for electrified vehicles to be able to contribute to Earth’s environment,” commented Toyota President, Akio Toyoda.

“We look forward to the wider use of hybrid technologies, not only in India and Europe, but around the world. At the same time, we believe that the expansion of our business partnership with Suzuki-from the mutual supply of vehicles and powertrains to the domains of development and production-will help give us the competitive edge we will need to survive this once-in-a-century period of profound transformation.”